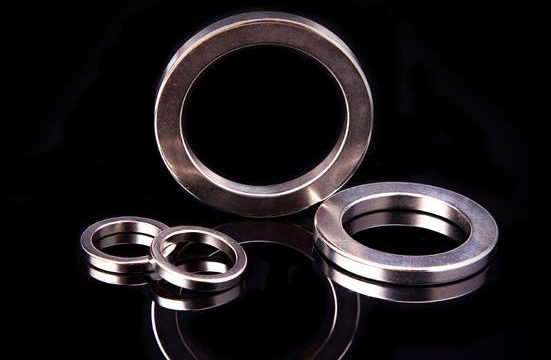 The magnetic field distribution of the neodymium ring magnets is as follows: the inner space of the ring still belongs to the outer magnetic field distribution, and part of the magnetic induction line connects the magnetic poles of both ends through the inner hole of the ring.
What is the magnet?
A magnet is a substance that repels each other. If small molecules in an object can be arranged in the same direction, it becomes a magnet. Its composition is iron, cobalt, nickel and another special atomic structure, the atom itself has magnetic moments, the general arrangement of these mineral molecules is disorderly. Magnetic regions interact with each other to show no magnetism, but the direction of molecular alignment tends to be consistent under the guidance of external forces (such as magnetic field), showing magnetism, also known as a magnet. 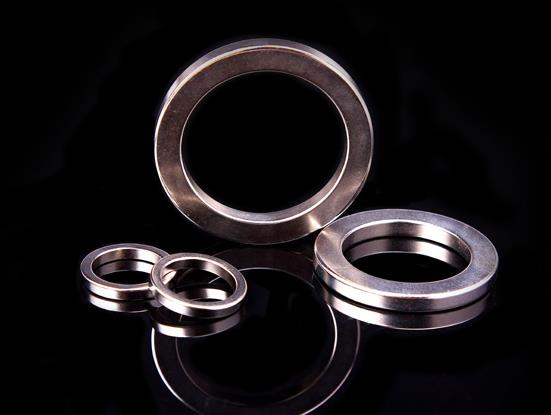 The magnetization of magnets:
Most magnetic materials can be magnetized to saturation in the same direction, which is called “magnetization direction” (orientation direction). Magnets without orientation (also known as isotropic magnets) are much less magnetic than oriented magnets (also known as anisotropic magnets).
Types of magnets:
Soft magnets include silicon steel sheets and soft cores; hard magnets include aluminum-nickel-cobalt, samarium cobalt, ferrite and neodymium-iron-boron, of which the most expensive is the neodymium-cobalt magnet, the cheapest is ferrite magnet, the highest performance is the neodymium iron boron magnet, but the most stable performance, the best temperature coefficient is the aluminum-nickel-cobalt magnet.

Advantages and disadvantages of ring magnet for motors
Ring magnets used in motors are usually bonded neodymium magnets with injection-molded ferrite rings. The disadvantage is that both materials have poor magnetic properties.
The advantage is that the cost is low, easy to assemble, and the general speed such as 5000rpm or so, no protection outside the magnet, but for the general motor is enough.
Ring-shaped sintered NdFeB is also available. The special mold is needed for production and magnetization, which is more expensive. In addition, there are various magnetizing methods, which can fill a better sinusoidal magnetic field. In the application of high-speed magnet motor, it is more reliable than the conventional method.

What are the advantages and disadvantages of neodymium ring magnets?
Advantages: simple structure, easy installation and cost saving.
Disadvantages: cost is more expensive than tile design.
Technically, the radiation ring has been very mature, and some large customers are using it in batches.

What is the size of magnets can be magnetized in general? Grade four and grade eight.
So far, it seems. The smallest diameter is 14mm, and the largest diameter is about 70 mm. In fact, the length-diameter ratio and wall thickness of the magnetic ring is very important, which directly affect the qualified rate and batch production. Specific specifications need to be analyzed in detail.

What is the effect of magnetization?
If making a magnetic ring is compared to making a cake, magnetization polarization is the process of cutting a cake. In theory, there is no limit to how many pieces you have to cut. You can cut as many pieces as you want.