Everything You Need to Know About Halbach Arrays

Everything You Need to Know About Halbach Arrays

What is a Halbach Array?

A Halbach array is a specific arrangement of a series of permanent magnets. The array has a spatially rotating pattern of magnetism which cancels the field on one side but boosts it on the other. The major advantages of Halbach Arrays are that they can produce strong magnetic fields on one side whilst creating a very small stray field on the opposite side. This effect is best understood by observing the magnetic flux distribution.

What are the applications of Halbach Arrays?

Halbach Arrays now have many applications and are used in a range of systems of varying complexity. One of the simplest applications of Halbach Arrays is in refrigerator magnets. In this case, the one-sided flux properties are exploited in order to boost the holding power of the magnet. Variable arrays of rod magnets can also be combined to create simple locking systems. If the magnetizations of the rods are arranged so the field is maximized above the plane and minimized below it, the flux confinement can be flipped by rotating each rod magnet 90°.

A more advanced example of a Halbach Array in action is in a Maglev train track or Inductrack, where magnetic levitation is used to support the carriage. The magnetic arrays lift the train a small distance above the track and can support a weight of up to 50 times that of the magnet. The operation is based on the principle of induction; as the array is passed over the metallic track coils, the variations in the magnetic field induces a voltage in the track. The track then creates its own magnetic field and, similarly to when you attempt to push the two like poles of neodymium bar magnets together when this field aligns with the field produced by the Halbach Array, repulsion causes the train to levitate.

Halbach arrays are also used in advanced scientific experiments such as synchrotrons and free-electron lasers, where they are known as Halbach ‘wigglers’. FELs have a very wide and highly tunable frequency range and are used in many applications ranging from medical to military. 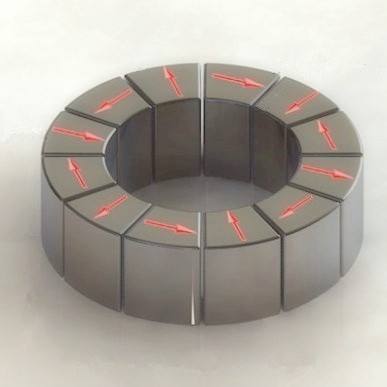 How is Halbach Array used in electric motors?

In a conventional machine configuration, the Halbach Array machine would look physically much like a DC machine; that is, the armature is on the rotor and the field is stationary. Such a machine could be operated as either a DC or an AC device.

The inherent advantage of this construction technique is that the inertia of the magnet rotor is dominated solely by the mass of the windings since there are no laminations required. One can envision the construction of a very high-speed low inertia machine.

How is Halbach Array used for magnetic bearings?

Halbach-arrays are widely used in the passive magnetic bearings. Nowadays industrial rotor machines are more flexible and often operating with ultra-high-speed. Using the passive magnetic bearings in certain applications, we need to take into account the occurrence of the radial component in the case of axial bearings and axial components in the case of radial bearings.

Among the Halbach Arrays, to guide the magnetic field in the desired way, we can distinguish boards between 180° and 90°. These terms relate to the relationship between the magnetization vectors.

Thank you for reading our article and we hope it can help you to have a better understanding of the Halbach Array. If you want to know more about Halbach Arrays and other magnet products, you can visit Stanford Magnets for more information.