Rare Earth Recycling from Magnets and Other Materials 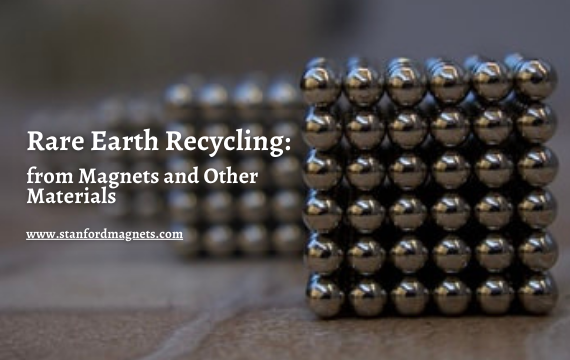 Every year, major brands release new models of electronic products to the world, accompanied by great fanfare, sleekly designed commercials, and a curated list of fancy features. These made it seem that all previous mobile phones were suddenly unusable, or at least outdated. Exacerbating this phenomenon is a practice called “planned obsolescence”, a strategy used by technology companies to artificially shorten the life of their products, so that new products can get more sales.

Planned obsolescence can involve many techniques: making products difficult to repair, easily damaged, or simply replacing them with new versions, even when the old ones were still functional[1]. Not only is this process a disservice to consumers, but it also harms people and the environment; however, new recycling techniques may provide a solution, and these techniques deserve research.

This increasing demand, in turn, increases the demand for the rare earth elements that form important components of these devices. Elements such as yttrium, europium, and terbium, for example, are used in smartphone screens because they are phosphors; that is, they emit light.

Although these and other rare earth elements are essential to smartphone function, mining their ores negatively impacts human health, because these elements are often found in close contact with thorium, which is radioactive and a carcinogen. Furthermore, in places where mining is poorly regulated, groundwater can be contaminated when large amounts of waste create wastewater ponds that leak dangerous chemicals such as heavy metals and acids. The waste and environmental disruption caused by mining can lead to pollution, erosion, and acidification, and many of the waste products are radioactive, further contributing to the damage[3].

One solution to this problem is rare earth recycling, and significant progress has been made in this area. For example, researchers at Oak Ridge National Laboratory have developed a method to recover rare earth metals from batteries in one step. This process uses membrane-assisted solvent extraction, in which porous support layers alternate with liquid membrane layers. Then, a driving force such as a concentration gradient pushes certain particles through the liquid film while excluding other particles, thereby separating the components of the initial substance. Applying this technique to the separation of rare earth elements from magnets is particularly effective because it turns a previously time-consuming and costly process into a relatively simple technique, and may be less expensive than mining new ore[4].

Magnets contain about 33% of rare earth elements, which brings a huge return on investment for recycling technology. Therefore, the recovery technology of rare earth elements is mainly concentrated on magnets. However, there is more work to be done toward recycling. Apart from magnets, different rare earth elements occur in other parts of electronics—for example, in cell phone screens. Research needs to be done on techniques to extract rare earth elements from these other components. This area of research is an essential field that needs more resources devoted toward it. The more elements that can be recovered from an old cellphone, the lower the environmental cost of producing a new one.

Through continuous research, more and more recycling strategies for old equipment and materials can be developed. With the progress of this field and future research, perhaps the next smartphone released at the technical conference will not be so new after all. Its basic components may be restored from those past “outdated” devices.