What is Speaker Magnet 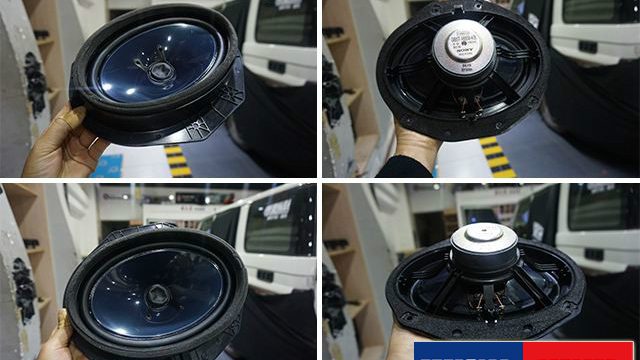 Ordinary ferrite magnets are generally used for low-end headphones, which have a poor sound quality and are not suitable for headphones. Neodymium magnet is used in high-grade headphones. It has first-class sound quality, good elasticity, good detail performance, good vocal performance, and accurate sound field positioning.
At present, most of the speakers still use the traditional cone-basin monomer forward and backward motion sound. Academically speaking, these speakers are called electrokinetic dynamic or moving coil. 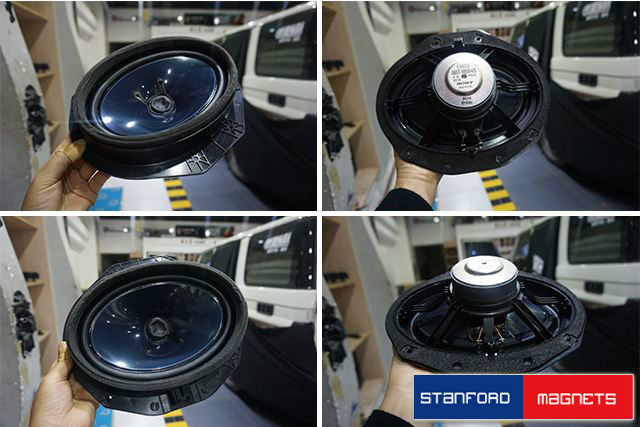 Below are several common ways of loudspeaker sounding:
1.Moving coil type
The basic principle comes from Fleming’s law of the left hand. When a current channel line is placed vertically between the north and south poles of the magnet, the channel line will be moved by the interaction between the magnetic line and the current. When a piece of vibration film is attached to the channel line, the vibration film will move before and after the current changes. At present, more than 90% of the conical basin units are movable coil design.
2. Electromagnetic type
A movable iron chopper is installed in the middle of a U-type magnet. When the current flows through the coil, the armature will be magnetized and the magnet will absorb, and at the same time, the vibration film will move. This design is inexpensive but ineffective, so it is mostly used in telephones and small headphones.
3. Inductive type
Similar to the electromagnetic principle, but double the armature and the two voice coils on the magnet are not symmetrical. When the signal current passes through, the two armature will push each other for different magnetic flux. Unlike electromagnetism, inductance can regenerate lower frequencies, but its efficiency is very low.
4. Electrostatic type
The basic principle is Coulomb’s law. Usually, plastic diaphragms are vacuum vaporized with inductive materials such as aluminum. Two diaphragms are placed face to face. When one of the diaphragms is added with positive current and high voltage, the other one will induce a small current, and the sound can be produced by attracting and repelling each other. Because of its lightweight and small vibration dispersion, electrostatic monomers are easy to get clear and transparent treble, fail to catch bass power, and its efficiency is not high. It is easy to collect dust by using DC electrodes. At present, manufacturers such as Martin-Logan have successfully developed a hybrid speaker with electrostatic and movable coils, which solves the problem of insufficient bass of electrostatic body and is widely used in headphones.
5, plane type
The earliest design developed by SONY in Japan, voice coil design is still moving coil type. However, the cone basin vibration membrane is changed into plane vibration membrane of a honeycomb structure. Because of the empty effect of fewer people, the characteristics are better, but the efficiency is also low.
6, ribbon type
Without the traditional voice coil design, the diaphragm is made of very thin metal, and the current flows directly into the channel body to make it vibrate and pronounce. Because its diaphragm is a voice coil, it has very light mass, excellent transient response, and good high-frequency response. However, the efficiency and low impedance of ribbon horns have always been a great challenge to the expander, and Apogee can be a representative. Another way is to have a voice coil but to print the voice coil directly on the plastic sheet, which can solve the problem of the partial low impedance, Magnepang is a leader in this kind of design.
7, horn type
The diaphragm drives the air at the bottom of the horn, which is very efficient because the sound is not diffused during transmission. But because the shape and length of the horn will affect the timbre, it is not easy to reproduce the low frequency. Now it is mostly used in giant PA systems or high-pitched monomers. American Klipsch is an old horn manufacturer.
8, Haier horn
There are other improved ribbon design developed by Dr. Haier in 1973, called Haier horn, which is very excellent in theory, but few users in Taiwan.
Piezoelectric is a design that uses piezoelectric materials such as titanic acid and voltage to stretch or shrink it to produce sound. Pioneer has modified piezoelectric designs with high polymers and used them on their treble monomers. Ion horn uses high voltage discharge to make air charged. When applied with AC voltage, these free charged molecules will sound due to vibration. At present, Ion horn can only be used in monomers with high frequency. Philips has also developed an active feedback loudspeaker (MFB) with an active feedback circuit inside the loudspeaker, which can greatly reduce distortion.
The magnet on the horn actually has coiled around it. The working principle of the horn is to transform the sound signal into the electrical signal and transmit it by converting it into the acoustic signal.

Speaker magnet s play an important role here
When our voice enters the horn, it will produce a specific change of current, which will make the coil magnetic, and magnet produces a certain regularity of attraction or repulsion movement, which will drive the vibration of the paper basin, amplify the sound.
Therefore, the role of magnets is to assist vibration.