We are living in the most critical period for climate change the world has ever seen. According to Intergovernmental Panel on Climate Change (IPCC), Climate change is already affecting every inhabited region across the globe with human influence contributing to many observed changes in weather and climate extremes (IPCC, SPM-11). In a report commissioned by the UN, the Intergovernmental Panel on Climate Change essentially stated that the world is currently experiencing a grave state of crisis—the ocean is warming, CO2 concentrations are the highest they have been in the last 2 million years, and with each decade that passes, the globe is only getting hotter. What’s more, this drastic change in the climate has been nearly unequivocally attributed to human activity in the past few decades. The next ten years will be of inestimable significance to addressing climate change. It is our responsibility to avoid the crisis we cause.

One of the key factors causing such devastating environmental damage is the use of fossil fuels, the extraction and processing of which has released excessive amounts of carbon dioxide and other greenhouse gases into the atmosphere. But in this era where fossil fuels are the main source of energy, what is our alternative?

Currently, several popular energy generation methods have their own advantages and disadvantages. Wind turbines are a popular option, but are not always viable options. For one thing, it may not necessarily be windy enough in a region to consistently power a wind turbine. For another, wind turbines simply do not produce enough energy: an average wind turbine makes enough energy to power 460 American homes a month (USGS). However, by this calculation, a staggering three hundred thousand wind turbines are needed to power the US alone. This number seems all the more impossible when compared with the current amount of approximately 57,000 (USGS). 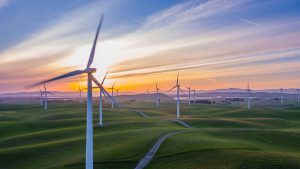 Solar panels are also popular, and many advocate for in-home solar panel installations, but they again fail to produce enough electricity to adequately sustain current usage and are subject to failure due to unideal weather conditions. Additionally, both of these energy options fail to decrease the amount of carbon dioxide already present in the atmosphere; they simply decrease the emission of additional carbon dioxide. Thus, a truly sustainable form of renewable energy is needed to remedy looming environmental catastrophes. This is where the use of advanced technology and resources come into play.

Direct air capture is a relatively new take on how atmospheric carbon levels can be reduced by essentially pulling carbon dioxide directly out of the atmosphere. This form of carbon capture not only decreases the amount of carbon dioxide in the air, but also is able to store the CO2 captured for later use. This system is currently able to remove nearly 9,000 metric tons of carbon per year from the atmosphere (Buettler & Holmes). While this number is not yet sufficient to counterbalance the rate of carbon emissions from other sources, like fossil fuels, it is growing, and newer, more efficient plants that can capture up to 1,000 Mt CO2 a year are being built currently. This technology is not without its downsides, however. Currently, direct air capture requires a significant amount of heat energy to purify carbon dioxide out of the air and store it (Buettler & Holmes). This means that direct air capture facilities must be built in locations with easily accessible pre-existing renewable energy sources to ensure that there is a net decrease in atmospheric carbon levels. Direct air capture is also currently quite expensive due to high equipment and operating costs (Buettler & Holmes). As such, further research is necessary to both increase the energy and cost efficiency of direct air capture.

Given the resources and financial means, I would conduct research on methods to increase the energy effectiveness of direct air capture. The main goal would be to test methods and materials that would allow us to decrease the amount of heat energy necessary for both solid and liquid air capture methods. The step of the direct air capture process that requires the most energy is converting solid calcium carbonate produced during the purification process into solid calcium oxide and gaseous carbon dioxide (Kieth et. a.l). This is because the solid calcium carbonate pellets must be heated thoroughly to overcome the energy barrier and produce carbon dioxide gas. Finding stable and effective alternatives to calcium carbonate in the air purification process would be a major step in decreasing the energy necessary for direct air capture to be viable. In terms of cost effectiveness, the most expensive part of the process comes from the cost of the machinery required to compress carbon dioxide gas enough for it to be stored geologically (Buettler & Holmes). Thus, research would have to focus on the development of lower cost pressure chambers that can accomplish similar feats.

Direct air capture can be an incredibly useful technology to remove carbon dioxide directly from the Earth’s atmosphere, resulting in what is termed ‘negative emissions’. With this system, we can directly counteract the effects of fossil fuel usage and other carbon emissions. This isn’t to say that other renewable energy resources do not deserve investment and research. To fully combat the course of climate change, multiple paths need to be taken simultaneously. Direct air capture is one promising route, but reducing the rate of greenhouse gas emissions and investing in a variety of alternative energy sources is also necessary. In short, this problem must be tackled from a multitude of angles to truly be taken down.

Of course, technological improvements are not all that we need to abate the climate crisis. Robust policy changes and international political support are necessary to allow a full transition into renewable resources to occur. With catastrophes such as record-breaking flooding and fires already beginning, it is imperative that massive structural changes to our energy systems are made as soon as possible, and on a global scale. It isn’t a matter of whether the time is right. The facts have spoken: the only time is now.

Note: The article is a submission for Stanford Advanced Materials College Scholarship 2021.